Yesterday was a jam-packed Roman day. We started early in the morning with some cappuccinos near the Colosseum because, hello, that’s what the Romans did. Then we had to meet up with our tour group to begin! We signed up for a tour of the Colosseum, the Roman Forum, and Palatine Hill.

The Colosseum is huuuuge. It was built in 8 years (whaaat?!) and could fit 70,000 people. I can’t believe how quickly they can build an amazing place like this back in the first century, and yet it’s gonna take about 20 years to build the Rail with all the technology we have! It was also a really hot day, the bottom is of a quick selfie I sneakily took, already getting sunburnt at 10AM!

Lots of history here with gladiators battling other gladiators and sometimes animals! The Colosseum is so intricately built, with passageways and tunnels that lead to different holding areas or outside the walls. Apparently there are 80 entrances (basically those archways you see on the outer walls) and as many staircases to allow for the 70,000 people to enter the arena. Incredible! 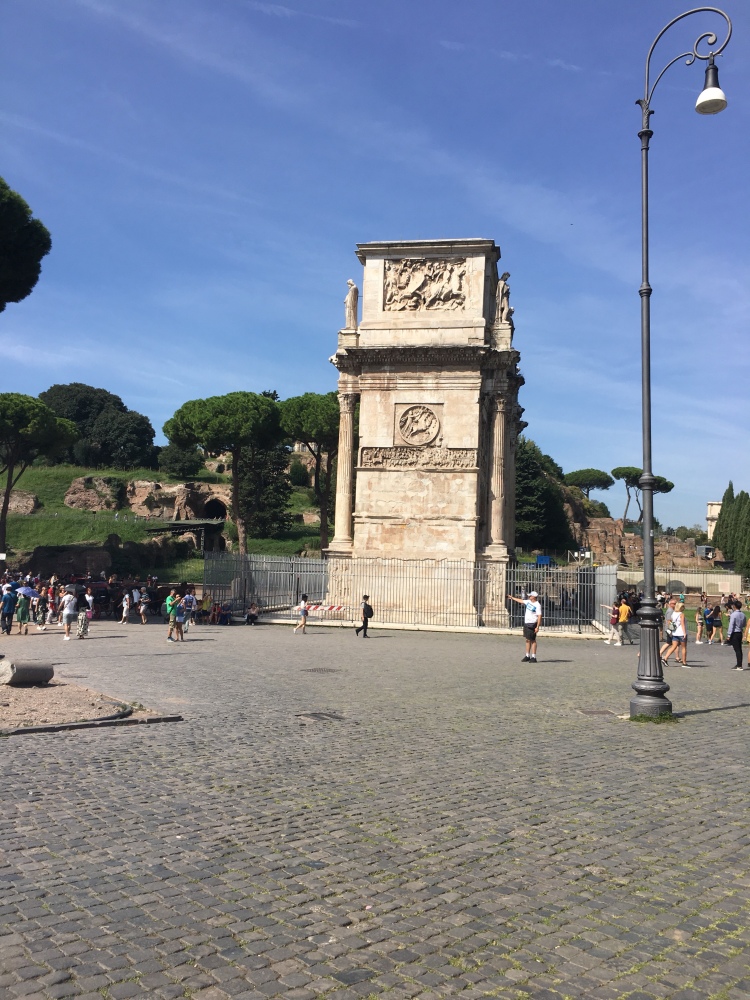 The first picture is of the Roman Forum taken at the Colosseum. This was the next stop on our adventure. The other picture is of an archway that Constantine made/ordered to be built, I think? I’m not quite sure, I can’t remember because I was too busy with this:

I guess it would’ve been easier to walk on a few centuries ago, but now it’s impossible to walk here without falling! And these Europeans walk fast!

These columns were buried for a really long time, I think our guide said until the early 1900s? They were buried by the sediment brought in when the Tiber River would overflow its banks. Then in the early 1900s they were excavated and now we can learn about them! The building in the back is the old Senate building, where the senators would have their meetings. 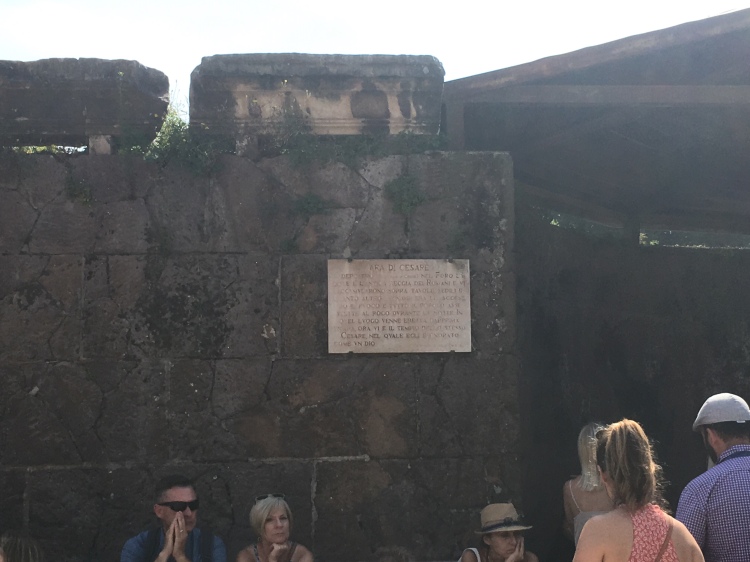 This is a really old church. I don’t remember anything about it, but it’s really nice!! 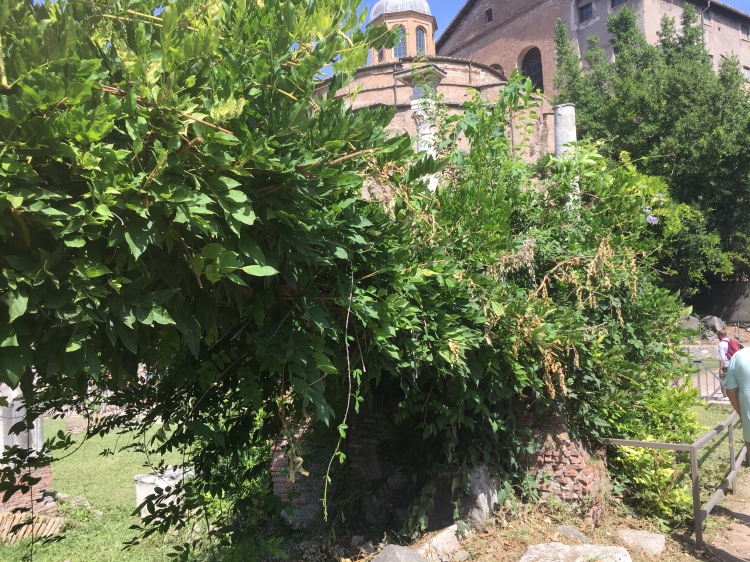 I know we were in a place with so much rich history, but I was so excited to see grapes growing!! I don’t think I have ever seen a grape vine in real life before, so this was a great experience! 😂

More original streets that are difficult to walk on!

These olive trees were cool too! They were lining the walkway as we went up the Palatine Hill. 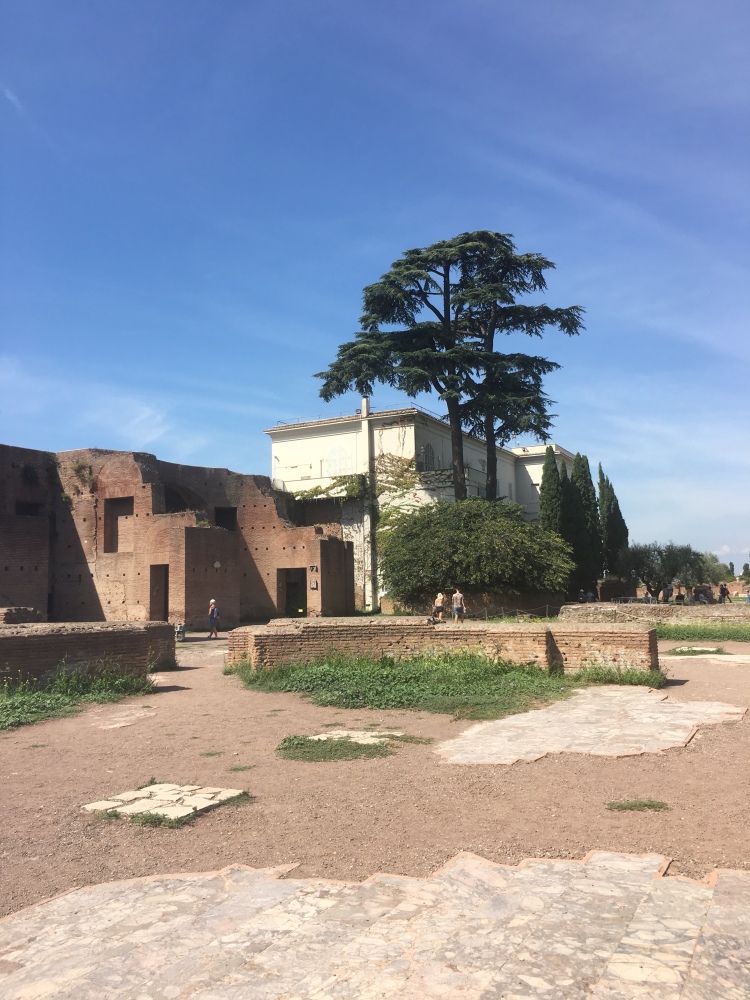 And on Palatine Hill, a bunch of rich dudes lived here and built huge mansions. There are 7 hills in Rome, and Palatine Hill is the one in the middle, so it was definitely prime real estate! These houses had a bunch of rooms for friends and family, of course, but also had huge meeting rooms for official business type stuff? And all the flooring was marble.

Views from the balcony! This green area used to be a stadium where they would have race horses, I think. And far off in the distance is another hill where rich people currently live!

After this experience, we went to a place called the Jewish Ghetto. It is no where near a Ghetto, in fact it’s really nice! But a lot of people and websites said we should have at least one meal there, so we had to try! We went to a place called Nonna Betta, where Anthony Bourdain went once. And it was amazing! A popular dish from the Jewish Ghetto is fried artichoke, and it didn’t disappoint! I don’t have any pictures from our meal, but if you want to know more about it you can find pictures on Google!

We also went searching for a gelato place in the Jewish Ghetto. We found one nearby and the gelato was to diiieeeee for. Taylor had fig and coconut, and I had strawberry and lemon! Yum! 🤤 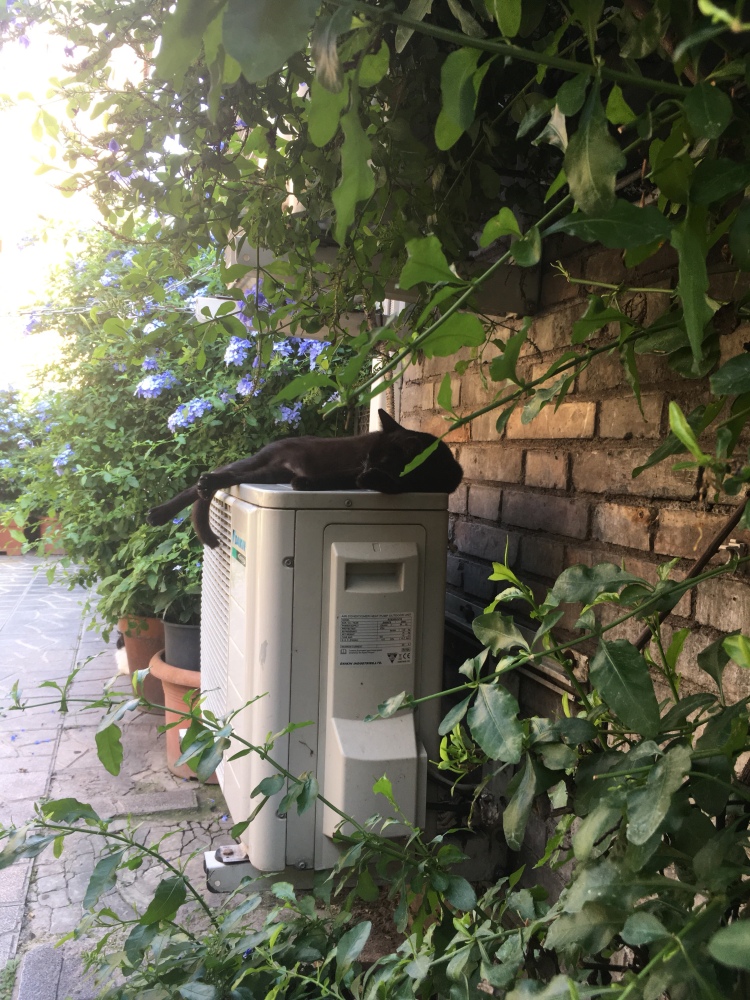 Ok and to cross off this item from Taylors bucket list: there is a cat sanctuary at the site where Julius Caesar was killed! This is Largo di Torre Argentina, and if you look it up, this is the site where he was (probably) murdered, but now it’s overrun by cats! And there is a group here that takes care of them, neuters them, etc. They said they currently have 144 cats on site that they take care of. Also, Taylor is a cat whisperer.

For dinner we went to a place near our hotel called Archimede 80. It came highly recommended by our new Australian friends, so we knew we had to try it out. The waiter, Max, was super nice and helpful. The entire menu was in Italian, so he told us that he would be our English translation for the evening. Instead of picking our own dishes, he said he could bring out 3 popular Italian dishes for us to try in smaller portions so that we could try all of them! And it didn’t disappoint! Again, I don’t have pictures because I wanted to enjoy our late-evening, romantic dinner date, but OH MY GOD I’ve never had Italian food like that IN MY LIFE. We were giggling, it was so good! We might even try to go back again today.

So today is our last day in Rome. I’m completely exhausted and ready to come home. We might try to make one last push to see some other stuff, but it’s supposed to get up to 90 degrees here (which means it’ll feel hotter in the sun), so we might just try to have an easy day again. Our flight is early tomorrow so we can’t be too exhausted when we come back, we still have to finish packing!

I'm a graduate research assistant at the University of Hawaii at Manoa. I study groundwater geochemistry and groundwater flow paths in the Hawaiian Islands. View more posts